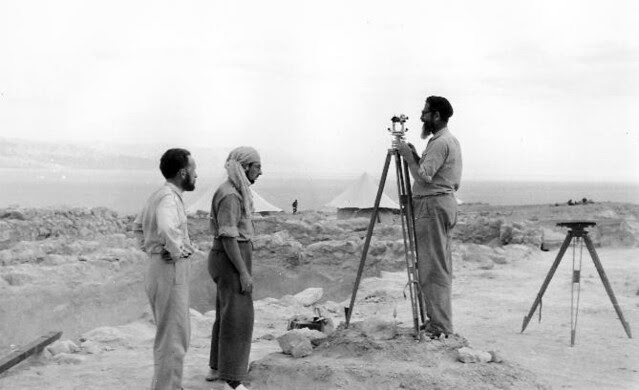 Photograph 39: Roland de Vaux, accompanied by two students of the Ecole Biblique, is surveying at L.96.

(L. Boer, 25 March 1954) Roland de Vaux, accompanied by two students of the Ecole Biblique, is surveying at L.96. Number 96 can be read on the light coloured rock on the left of de Vaux’s instrument. The men are standing next to the cistern (L.91) that was being excavated that week. Behind the cistern, the tents, the Dead Sea, and the mountains of TransJordan are visible.

In 1947, the first cave containing manuscripts of the Dead Sea Scrolls was found by Bedouin shepherds, north of an ancient ruin known as Khirbet Qumran near the Dead Sea. Originally known as the ‘Ain Feshkha Cave’, the manuscripts and other artefacts in Qumran Cave 1 (1Q) illuminated both the history of the Biblical text and the variety of thought in early Judaism, and caused an international sensation. The nearby site of Qumran itself was excavated over five seasons from 1951, under the directorship of Father Roland de Vaux, of the École Biblique et Archéologique Française de Jérusalem. De Vaux concluded that this remote and unusual site was occupied by a little-known ‘sect’ of Judaism mentioned by Josephus, Philo, Pliny and Dio Chrysostom: the Essenes. It was suggested that they hid the Dead Sea Scrolls ahead of the Roman army’s arrival in 68 CE.

This set of photographs illustrate a special website feature that is published on the Fund's pages at www.pef.org.uk/qumran/

While de Vaux published a number of important preliminary reports, he summarised the excavations synthetically only in his Schweich Lectures, for the British Academy, in 1959. After his death in 1971, de Vaux’s field notes and materials on Qumran remained unknown until Jean-Baptiste Humbert and Alain Chambon published these in 1994 with a dossier of important plans and photographs from the excavation. This publication was followed by a scientific volume. Nevertheless, there are points in de Vaux’s field notes where readings are doubtful, and, in addition, there are many aspects of the site that remained unclear during the course of excavations and areas undocumented by photographs.


His photographs indicate the huge energy of the excavations and their rapid progress, as well as providing evidence of obscure areas of the site. In addition, Bart Wagemakers was also entrusted with photographs by a journalist, Peter Pennarts, taken at the same time, which are equally important. The Palestine Exploration Fund is pleased to exhibit these photographs with comparative modern photographs and explanatory captions written by Bart Wagemakers and Joan Taylor, and is very grateful to both Annemie Boer and Peter Pennarts for permission to make the 1950s images available.