Has the "Eighth Scroll" been found?

A 1,500 year-old text recently discovered in Turkey might come pretty close to fitting the bill. Written in Jesus Christ's own language of Aramaic (whereas the Bible is written in the dead language of Koiné Greek – a language Jesus never spoke), and hidden away out of fear of the message it contains (Jesus Christ's prediction of the coming of Muhammad), this new Bible threatens the foundation of Trinitarian Christianity.

Now, I can guess what a lot of people are thinking: "Turkey? An ancient Bible found in Turkey, of all places? And in present day? How much sense does that make?" Believe it or not, it makes a lot of sense. Let's remember that the oldest and most authoritative New Testament manuscripts, the Sinaiticus and Vaticanus codices, were discovered in the 1800’s. The Dead Sea Scrolls and Nag Hammadi texts were found less than seventy years ago. So it is not beyond the realm of possibility for sacred scripture describing the teachings of Jesus to be discovered in modern day.

Historically, Turkey's Cappadocia was an extraordinary hold-out of Unitarian Christianity. The area is dotted with cliff-caves in which Unitarian Christians hid from invading Roman armies. By comparison, The Dead Sea Scrolls were discovered in Qumran, on the Dead Sea, in a total of 11 caves. Eleven. Count them. Cappadocia contains hundreds if not thousands of caves, scattered over a vast area. The largest Dead Sea cave was one room, no larger than a small bedroom of modern dimensions. The largest caves in Cappadocia are vast, labyrinthine networks. These are underground cities, some of which housed as many as 2,000 individuals.

Constantinople (modern-day Istanbul) was the seat of the papacy at one time. It subsequently became the seat of the Islamic Caliphate. To this day, the Topkapi museum in Istanbul houses some of history's greatest religious relics, including Moses' staff and relics from the lives of the prophets Abraham, David, and Muhammad. This was an area rich in religious history and fertile in possibilities.

So it really shouldn't be a surprise to hear that an ancient Bible has been found in Turkey. The premise that this Bible was hidden away to protect it from being destroyed by the Vatican is entirely plausible. In choosing the four gospels that grace the modern Bible, Church authorities destroyed between 250 to 2,000 gospels that it deemed unworthy. Given those odds, if I had possessed a sacred scripture back then, I most certainly would have hidden it away for posterity.

My action/adventure novel, The Eighth Scroll, has been on the market for five years. The Eighth Scroll is a thriller based on the premise that a controversial scripture has been discovered – a scripture that has been hidden from the public eye because the "heresy" it contains might actually be true. Scholars have correctly believed this final text would either confirm or condemn established religious beliefs and practices. As a result, world powers will fight to possess it, or kill to suppress it. Pure fiction? Maybe, but maybe not. Today's headlines are remarkably similar to this story line: An ancient Bible has been found. The heresy it contains is Jesus' prediction of the coming of Muhammad. It was hidden all these years to protect it from the Vatican, who wanted it destroyed.

Hmm. Has the "Eighth Scroll" been found? Quite possibly, but only time and objective scholarly analysis will tell. Priced at $1.7 million just for a photocopy, it won't be available to the public anytime soon. So you can't read this new Bible quite yet. But you can read The Eighth Scroll. And with the e-book version priced at only 99 cents, it is a lot more affordable than the $28 million pricetag of this recently discovered Bible. 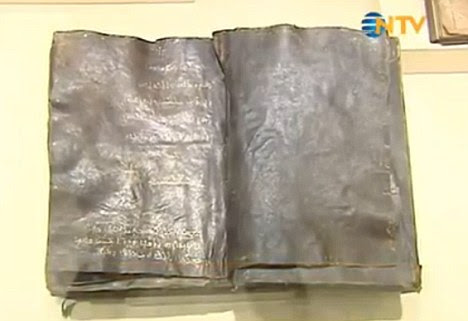 The text, reportedly worth $22 million, is said to contain Jesus’ prediction of the Prophet’s coming but was suppressed by the Christian Church for years. (Photo courtesy of the Daily Mail)

inShare8By AL ARABIYA
A 1,500-year-old Bible in which Jesus is believed to have foretold the coming of the Prophet Mohammad to Earth has attracted attention from the Vatican this week.

Pope Benedict XVI has reportedly requested to see the book, which has been hidden in Turkey for the last 12 years, according to the Daily Mail.

The text, reportedly worth $22 million, is said to contain Jesus’ prediction of the Prophet’s coming but was suppressed by the Christian Church for years for its strong resemblance to the Islamic view of Jesus, Turkish culture and tourism minister Ertugrul Gunay told the newspaper.


“In line with Islamic belief, the Gospel treats Jesus as a human being and not a God. It rejects the ideas of the Holy Trinity and the Crucifixion and reveals that Jesus predicted the coming of the Prophet Mohammad,” the newspaper reported.

“In one version of the gospel, he is said to have told a priest: ‘How shall the Messiah be called? Mohammad is his blessed name.’

“And in another, Jesus denied being the Messiah, claiming that he or she would be Ishmaelite, the term used for an Arab,” the newspaper added.

According to the report, Muslims claim the text, which many say is the Gospel of Barnabas, is an addition to the original gospels of Mark, Matthew, Luke and John.

St. Barnabas is traditionally identified as the founder of the Cypriot Church, an early Christian later named an apostle.

Gunay said the Vatican has officially requested to see the book, which Turkey had discovered during a police anti-smuggling operation in 2000.

The gang was reportedly convicted of smuggling various items seized during the operation, including the Bible, and all the artifacts were kept in a safe at an Ankara courthouse.

It remained closely guarded by authorities before being handed over to the Ankara Ethnography Museum where it will soon be put on show.

A photocopy of a single page from the leather-bound, gold-lettered book, penned in Jesus’ native Aramaic language is reportedly worth about $2.4 million.

But skepticism over the authenticity of the ancient handwritten manuscript has arisen.

Protestant pastor İhsan Özbek has said this version of the book is said to come from the fifth or sixth century, while St. Barnabas had lived in the first century as one of the Apostles of Jesus.

“The copy in Ankara might have been written by one of the followers of St. Barnabas,” he told the Today Zaman newspaper.

“Since there is around 500 years in between St. Barnabas and the writing of the Bible copy, Muslims may be disappointed to see that this copy does not include things they would like to see … It might have no relation with the content of the Gospel of Barnabas,” Özbek added.

But suspicions could soon be laid to rest.

The real age of the Bible could soon be determined by a scientific scan, theology professor Ömer Faruk Harman told the Daily Mail, possibly clarifying whether it was written by St. Barnabas or a follower of his.