Bones in Bulgaria might be John the Baptist's, new research says 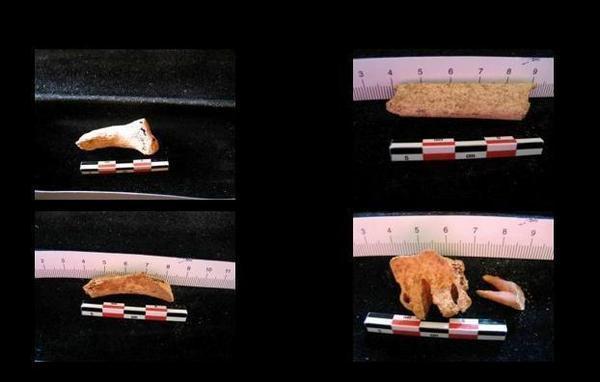 Bones found in a Bulgarian church are claimed to be from John the Baptist. The knucklebone that researchers dated is in the upper left. (Oxford University / June 15, 2012)

A small collection of human bones found under a Bulgarian church are the right age and ethnicity to support the claim that they belonged to John the Baptist, researchers said. Radiocarbon dating indicates the bones came from the 1st century and mitochondrial DNA indicates they belonged to a person of Middle Eastern origin, the research team said. "Whether that person is John the Baptist is a question that we cannot yet definitely answer and probably never will," said archaeologist Thomas Higham of Oxford University, who conducted the radiocarbon dating.

John the Baptist was an early preacher who, according to the Gospels, foretold the coming of Jesus and baptized him in the River Jordan. He was ultimately beheaded at the order of King Herod. Oxford historian Georges Kazan has shown that, in the latter part of the 4th century, monks had taken relics of John out of Jerusalem, including portions of his skull. The Roman emperor at the time ordered them brought to Constantinople and had a church built to house them. Other records suggest that, perhaps one or two centuries later, some of the relics were sent to other churches as gifts.

The bones in question were discovered in 2010 by Bulgarian archaeologist Kazimir Popkonstantinov, who was excavating under an ancient church on the Bulgarian island known as Sveti Ivan, which translates into English as Saint John. He found six human bones, including a knucklebone, a tooth and the face part of a cranium, all in a small marble sarcophagus under the church floor near the altar. Animal bones were also in the sarcophagus. Higham and Oxford archaeologist Christopher Ramsey attempted to date all of them, but only the knucklebone contained enough cartilage for dating.