Blog Critic Review of The Returned 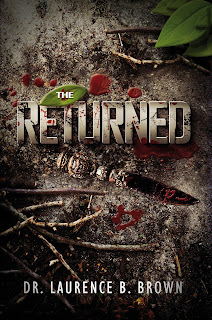 From the author of The Eighth Scroll, Lawrence Brown’s new novel is an adventure story set in the jungles of the Amazon sketched with believable detail and well developed characters. While it’s not high adventure in the sense of mixing in fantastic para-normal elements nor multi-layered plots and sub-plots, it’s a slow cooker that builds to two climaxes in the same place but decades apart.

The story focuses on twin African-American brothers, Nathan and Mark Jones. Nathan is a star in every endeavor he engages in; Mark is a conspicuous under-achiever. For a summer vacation, they join their college geochemistry professor on a prospecting trip to collect soil samples deep in the Amazon. But the brothers begin to realize they can’t trust everyone in their party. Worse, the journey starts to descend into disaster when the native guides abandon them. Starting out as a group of 12, the adventurers suffer a series of fatal conflicts with nature and local tribes.

Uncertain of the correct course to take, the survivors break into two groups with different ideas on how to locate help. Then, the Jones brothers find themselves drawn into a vortex of religious, superstitious, and cultural issues with one isolated tribe that had no previous contact with outside civilization. There Nathan and his translator, Tonto, must find a balance between survival and escape. Decades later, Nathan returns to find out what had happened to this tribe in his absence. What he learns is yet another sad chapter of an ill-fated expedition.

This comparatively short novel is tightly woven despite its deep cast of characters. Little space is needed to flesh out the participants of the expedition with their different strengths and weaknesses, their motivations, their abilities to adapt to an increasingly hostile environment. Brown is equally successful capturing the personalities of the tribes people despite their being no common language between the outsiders and their rescuers. Brown allows the horror to build without over dramatizing the scenes, permitting some of the most poignant moments to occur off stage.

As a result of this sparse style, readers are free to make their own inferences on the themes that can be interpreted from this picturesque tableau. You’re not likely to be asking new questions, but readers may wonder about what their choices might have been if trapped in such life and death circumstances far from civilization and its codes of conduct.