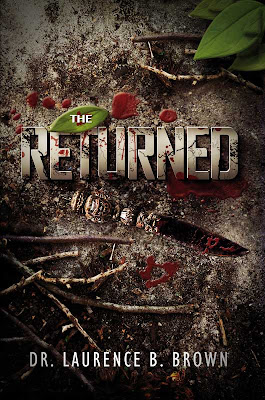 Nathan stood frozen for a moment in the sinister silence. Finally, a lone insect chirped off to one side. Its neighbor joined in, and together they jump-started the familiar chorus of animal sounds.
Tonto slid to Nathan’s side.
“I’ve never heard an animal scream like that before,” Nathan said as he peered ahead. “What was it? A wild pig?”
“Pigs squeal, Jane. You’re a city girl for sure. Woolly monkeys—they scream.”
Nathan forced himself to smile. “Woolly monkey for dinner, then. Um . . . what do they taste like?”
Tonto grinned mischievously up at him. “Woolly monkey? Tastes like human.”
“Oooo-kay. I know I’ll regret asking this . . . but what does human taste like?”
“Pig. So I hear.”
Nathan nodded slowly, then turned back to the animal trail. “I was right,” he said. “I’m sorry I asked.”
A couple of minutes later, Nathan stepped through a thick curtain of shrubs and found the group scattered and resting around a small clearing. Professor Wogan sat on his pack, leaning his back against a tree, his M2 carbine propped against one knee. The guides dexterously skinned and gutted the monkey, chatting cheerfully among themselves.
“A favorite of theirs,” Tonto said, after listening to their chatter. “They say we need one more. Then everybody have enough.”
“They can have my share,” Nathan said as he swung his pack to the ground at his feet. “After what you told me, I’m sticking to beans and rice tonight.”
Nathan nodded to his brother, who settled onto the ground, one arm draped across the upright pack beside him. Mark raised an eyebrow in his direction, then leaned back against a tree trunk and closed his eyes.
Nathan eyed Wogan’s carbine enviously. “Three M2 selective fire carbines in the group, two 12-gauge shotguns and one M1 Garand. Not to mention Hawley’s fancy lever-action Winchester. That’s a lot of firepower.”
“Amazon’s dangerous.” Tonto motioned to the light survival rifles lashed to Nathan’s and his brother’s packs. “You forget those?”
Nathan snorted, and then almost immediately regretted his derision. Most natives couldn’t afford even the poorest quality rifle. Here in the interior, firearms were virtually unknown. “Combination 440 shotgun and 22-caliber rifle,” he said. “Good for small game. Almost useless against anything big.” He shrugged.
Nathan knew the pecking order. The adults carried the big guns. He and his brother toted the survival rifles, to be used only in emergencies. The Indians were allowed nothing other than machetes.
Nathan’s mind drifted, and he found himself back in the college classroom. The overhead lights illuminated his final exam paper, laid out on a pitted wooden desk. He sat hunched over his essay, pencil hovering at the end of his final paragraph. Glancing up, he saw only seconds left on the clock. A whispered “Psst!” drew his attention. Looking over his shoulder, he found Mark bridging his pencil between fingers and thumbs of both hands, grinning at him. He grinned back, the bell rang, and Mark snapped his pencil in two with a spray of graphite and splinters.
“Hand ‘em in,” Wogan shouted from the front of the room as he snatched a test paper from the nearest student’s desk. “Grades will be posted on the bulletin board outside the department office next week. Excepting the two of you scheduled to join me on my Amazon trip, I’ll see the rest of you next school year. Have a good summer vacation.”
Ten days later he and Mark were packed, ready to go, and sharing their last dinner with family. He had expected their last meal together to be a jovial affair, but instead their father recounted the many dangers of the Amazon. He concluded by reminding Mark of the many serious blunders he had made in his nineteen years—and that similar mistakes could be fatal in the wild.
Mother rose from the table, patted Mark’s head and pinched their kid sister’s cheek as she turned to the kitchen, plates in hand.
“You take care of yourself down there, Nathan, you hear?” she said.
Mark forced down a mouthful of meatloaf with a bob of his head and said, “I’ll take care, too, Ma.”
She stopped by the kitchen door and turned halfway. “I meant both of you, honey. Both of you take care down there.” Plates balanced in both hands, she pushed through the swinging door.
Mark turned hurt eyes across the table. Nathan couldn’t meet his brother’s gaze. Their father cleared his throat and stared across the room, out the window.
Nathan grit his teeth and dropped his eyes to his plate.
Nathan snapped back into the present suddenly, the flattened brown features of his Indian friend only inches away from his own face.
“You want to live?” Tonto asked with a shrewd smile. He held the rough, rusted blade of his ancient belt knife between them, pointed directly at his chest. “Turn around.”
Nathan held both arms out to his sides, as if to be frisked, and obediently about-faced. He felt a gentle pressure from the native’s blade on his back and asked, “What is it this time?”
Tonto held his knife out for inspection. Draped over the edge slithered a ten-inch-long grey centipede, waves of movement rippling down both rows of legs. Behind its evil-looking black head were two modified legs for delivering its poisonous venom, and two fleshy, wicked-looking appendages he presumed to be stingers protruded from its tail. “That would kill me?”
“You want I put it back?” He leaned closer and Nathan reflexively took a step back. “No, no, that’s okay. Give it to our redneck buddies,” he said, nodding in the direction of Duke and Hawley.
“Take a rest,” the native said as he flicked the centipede into the brush. “Drink water.”
Good advice. The temperature and humidity had sweated him dry, and his urine was darkening. He hoped his kidneys were still healthy. It was amazing how many ways a man could die down here.
at 12:00 AM