3.)  Cut to recent history. In 1947, a Bedouin shepherd discovered seven scrolls in what is now known as Cave 1. After that, the race was on. Archaeologists tried to excavate the caves scientifically, while Bedouins plundered them for whatever they could sell. In 1952, a French Dominican named Roland de Vaux located Cave 4. That cave contained over 15,000 fragments of over 800 manuscripts. A year later, an international team of eight scholars was assembled, with De Vaux as project director. Thirteen years after that, in 1966, De Vaux’s team was publicly accused of obstructing release of the scrolls because the content is contrary to Trinitarian Christianity. 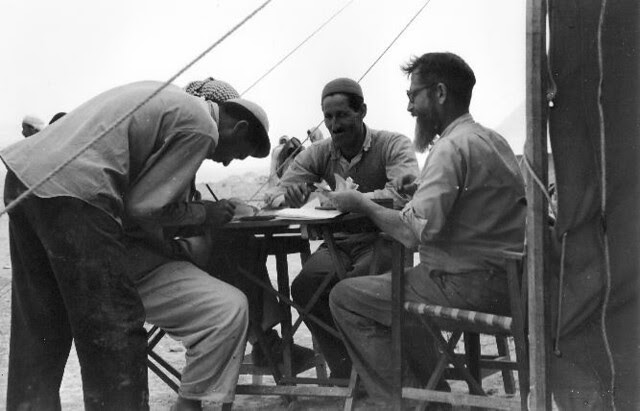 (L. Boer, 25 March 1954) Pay-day. De Vaux is sitting in front of a tent paying a local worker. Presumably the recipient is signing for receipt.